Mast cell tumours occur mostly on the flanks (50%), in 40% of cases on the paws and 10% on the head and neck. They mostly originate in the skin or subcutaneous tissues and are rarely seen elsewhere (such as the conjunctiva, salivary glands, throat and oral cavity).

A mast cell tumour consists of cancerous mast cells. A mast cell is a certain type of white blood cell that would normally protect the body against parasites (viruses and bacteria are dealt with by other white blood cells) but can also contribute to allergic reactions. Therefore, these cells can mainly be found in tissues adjacent to the outside world, such as the skin, the respiratory and digestive system.

A remarkable aspect of mast cells is that they contain a large number of granules, which in turn contain inflammatory substances (such as histamine, heparin, prostaglandins, platelet activating factors, leukotrienes, substances attracting other white blood cells such as neutrophils and eosinophils, enzymes that degrade proteins, serotonin). When a mast cell encounters a parasite, it will release the contents of its granules to damage that parasite and cause a local inflammation. This characteristic is of importance when dealing with cancerous mast cells. Some cancerous mast cells contain a lot of granules which can release their contents at the slightest stimulus. This release can lead to local inflammation, itching, digestive ulcers, and in severe cases to a serious drop in blood pressure or shock and other symptoms associated with serious allergic reactions.

Most mast cell tumors metastasize first towards the regional lymph nodes, afterwards mainly towards the liver (46%) and the spleen (41%). Other organs can be involved as well, lung metastases are very rare.

Mast cell tumours are the most frequent skin tumour in dogs (16-21%) and are mainly seen in middle-aged dogs.

Mostly, mast cell tumours are well delineated and appear as a single lump. In 11-14% of cases more than one tumour will be present. If a mast cell tumour is well differentiated (= if a clearly recognizable organization is present within the tumour), it will manifest itself as a single lump, have a size between 1 to 4 cm, grow slowly, rarely develop ulcers and can be present for years without causing any issues. If a mast cell tumour is poorly differentiated (= if there is no clearly recognizable organization present within the tumour), it tends to grow rather fast, potentially become very large, develop ulcers and lead to local irritation. The surrounding tissues are often swollen, and satellite lumps may develop.

When a mast cell tumour is stimulated (e.g. manipulation by owner/veterinarian, trauma (e.g. when the dog gnaws on it), radiation, treatment with heat/cold), the mast cells can release inflammatory substances. As a result, the tumour will swell and a red ring will become visible around the tumour. The latter is called the sign of Darier. The swelling and redness will disappear by itself after a while, if the dog does not continue to scratch or lick.

The larger the tumour and/or the more tumours there are, the more dangerous the effects of the inflammatory reaction can become. The inflammatory substances can cause many side effects, such as itching, digestive ulcers (associated symptoms are vomiting (blood), decreased appetite, diarrhea, black feces and stomachache), clotting anomalies, low blood pressure and shock. Gastric ulcers occur as a consequence of blood vessel damage, an increase in gastric acid and an overly contracting stomach. On autopsy or during surgery, a gastric or intestinal ulcer is found in 35-83% of dogs with a mast cell tumour.

Mast cell tumours do not have a typical appearance and can take on very different shapes. Therefore, when a tissue mass is present, one should always examine it cytologically because it could be a mast cell tumour.

A typical aspect of mast cell tumours is in most cases they are easy to recognize via a cytological examination. After all, mast cells are filled with granules that are clearly recognizable under the microscope after staining. 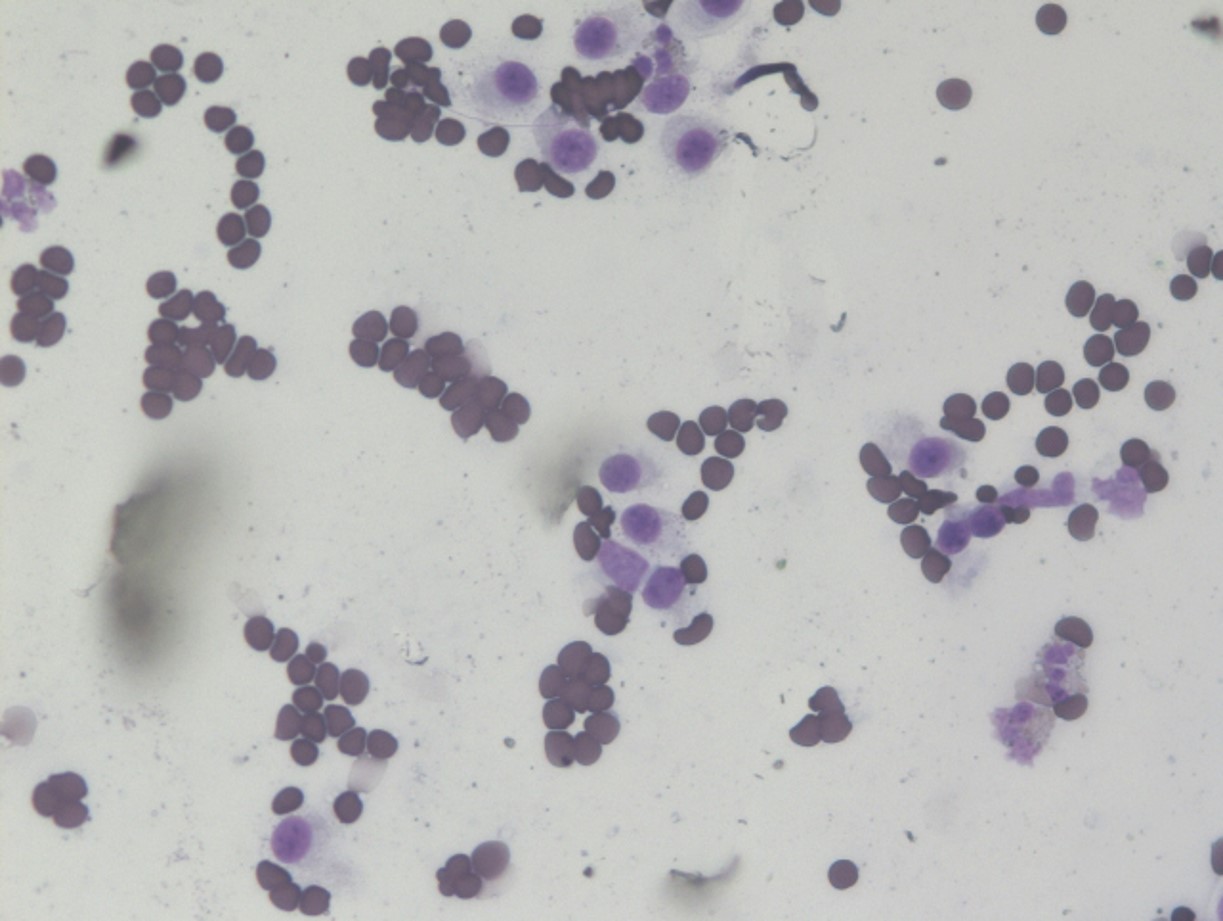 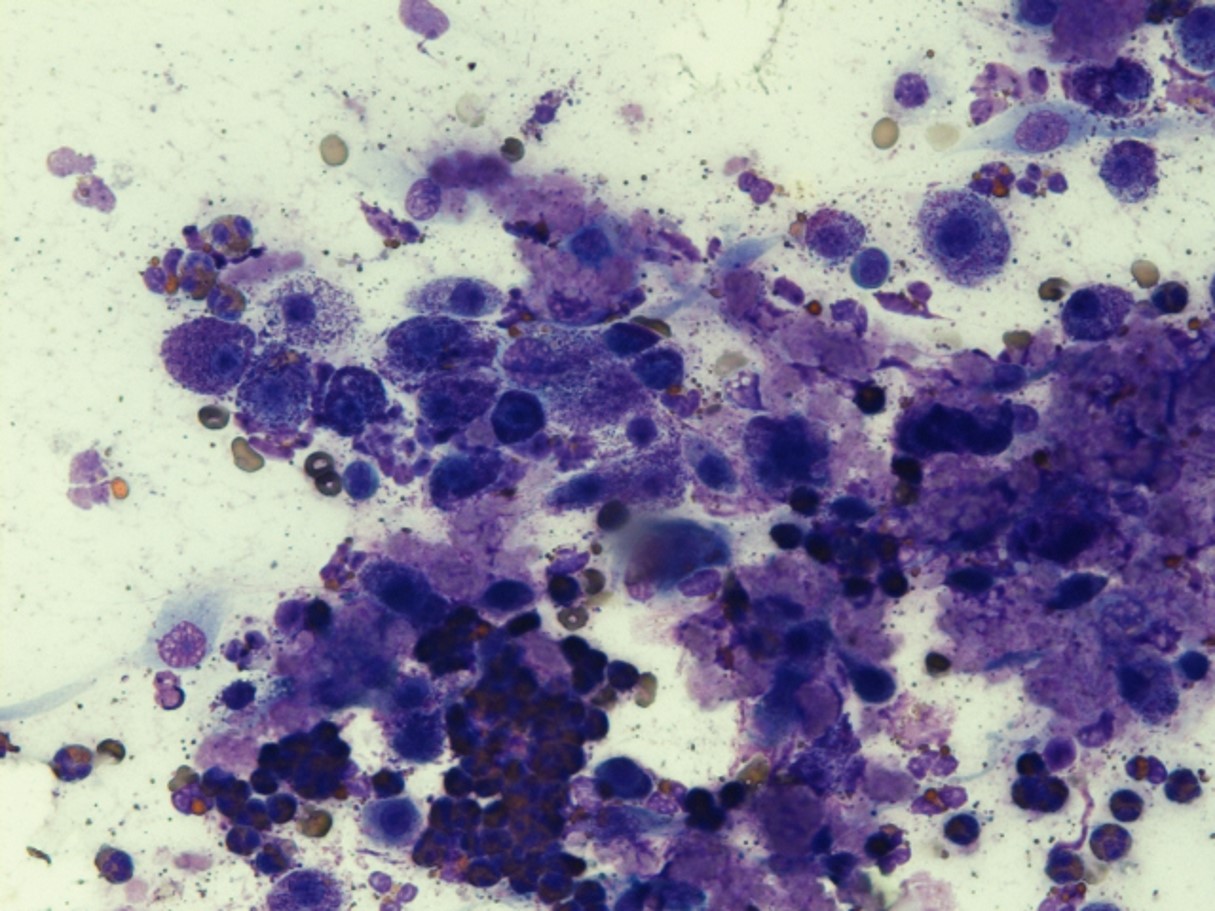 In case of any non-resectable, large or fast-growing tumour, it is advised to examine a tissue sample to determine its grade. Mast cell tumours are categorized in 3 big groups:

The less a tumour is differentiated, the less granules are present, which makes the tumour less recognizable. This is why it can be necessary to apply additional staining via immunohistochemistry. A well differentiated mast cell tumour has a low risk of metastasizing (up to 10% of cases), while the risk is much higher with undifferentiated tumours (55-96% of cases). Besides the tumour grade, other parameters will indicate how aggressive the tumor is. Furthermore, when a mast cell tumour has been surgically removed, histological examination will allow the veterinarian to assess whether the tumour was removed in its entirety.

Staging before treatment is not necessary when the tumour is a known grade 1, small and slow-growing.

This information will help decide whether and which additional treatments are necessary.

The preferred treatment for mast cell tumours is surgical removal of the tumour with “adequate” margins. However, there is no consensus about what “adequate” margins are for mast cell tumours. As a rule of thumb, a margin of 1-2 cm of normal tissue is considered sufficient for a grade 1 mast cell tumor, a margin of 2-3 cm for a grade 2 and 3-4 cm for a grade 3, although this can also depend on the size and location of the mast cell tumour. Other surgeons prefer a proportional approach with margins equal to the maximum diameter of the MCT. For both approaches, deep margins include removal of one uninvolved fascial plane in continuity with the tumour. If necessary, muscle layers may also be removed deep to the tumour. A surgical intervention will be curative for most dogs. The margins must be checked via histopathology for the absence of tumour cells.

If the tumour could not completely be removed by surgery, the following can be done:

If the tumour cannot be surgically removed, non-metastatic mast cell tumours can be treated with tigilanol tiglate. This substance influences cell signals (activation of protein kinase C), resulting in a rapid local inflammatory response, disruption of the tumour blood vessels and death of the tumour cells (due to lack of blood supply). This substance is administered via an injection into the tumour, after which the tumour swells and darkens within the day (much like a bruise). Within a week, the tumour tissue continuously disintegrates, after which only a wound remains where once the tumour was.

The most common side effects include (from most to least common): injection site pain, wound formation, temporary limping, vomiting, diarrhoea, redness / swelling around the tumour, loss of appetite.

Pre-treatment: starting 2 days before the injection of tigilanol tiglate into the tumour, the dog should receive corticoids to counteract side effects related to release of the granules. On the day of treatment, H1 and H2 blockers are added and, if necessary, complementary pain relief (corticoids should not be combined with non-steroidal anti-inflammatory drugs).

In case of metastases or a high risk for metastases (e.g. in case of an incompletely removed high-grade 2 or grade 3 tumour), systemic treatment is advised. Surgery and radiotherapy are local treatments and cannot stop metastases from spreading.

The medication used for systemic treatment can consist of:

H1 and H2-blockers reduce the risk of gastro-intestinal complications and allergic reactions and should be given to all patients with large mast cell tumours, known high-grade grade 2 and grade 3 tumours or to dogs with digestive issues. This medication will counter the effects of histamine (H1-blockers are given for general allergic reactions and improve wound healing, H2-blockers are given for digestive issues). Additional gastric protection is strongly advised when the dog exhibits mast cell tumour-associated symptoms, when the tumour is repeatedly manipulated during surgery and in case of tumour tissue remnants after surgery.

The prognosis depends on multiple factors: the histological grade (mitosis index included) of the tumour, its location, the presence of metastases at diagnosis and the willingness of the owner to treat.

Chemotherapy can lead to a prolonged survival time and usually involves vinblastine. Depending on the chemotherapy regimen used, the survival times reported in the literature vary between 46 days (single-agent therapy) and 533 days (multi-agent protocol).

Location of the tumor

When the internal organs or the bone marrow are affected, the prognosis is very poor.