Lung tumour
Back to overview
Summary

Cells in the lungs can degenerate and form a tumour. Lung tumours can spread through local ingrowth or through the bloodstream and / or lymph vessels and thus spread to other parts of the lungs, lymph nodes or spread even further.

These tumours are relatively rare in dogs (less than 1% at autopsy). The average age of diagnosis of lung cancer in dogs is 11 years, with the exception of a form known as anaplastic carcinoma, which occurs on average around 7.5 years of age.

Lung cancer may be more commonly found in the Boxer, Dobermann, Australian Shepherd, Irish Setter, and Bernese Mountain Dog vs other breeds.

Up to 30% of cases have no clinical symptoms at the time of diagnosis.

Aberrant neurological behaviour can occur as a result of metastases to nervous tissue.

Lameness may occur as a result of hypertrophic osteopathy in which new bone forms at a site remote from the primary tumour. The limping may improve after the lung tumour is removed.

Often a lung tumour does not cause abnormalities on auscultation (examination with the stethoscope) unless the process is extensive and / or because of fluid build-up in the lungs or the thoracic cavity.

Often no abnormalities are found on blood tests.

The majority of lung tumours are diagnosed by chest radiographs. In a study involving more than 210 dogs with a primary lung tumour, more than half (53.8%) were found in a single lung lobe and 37.1% in multiple lobes. 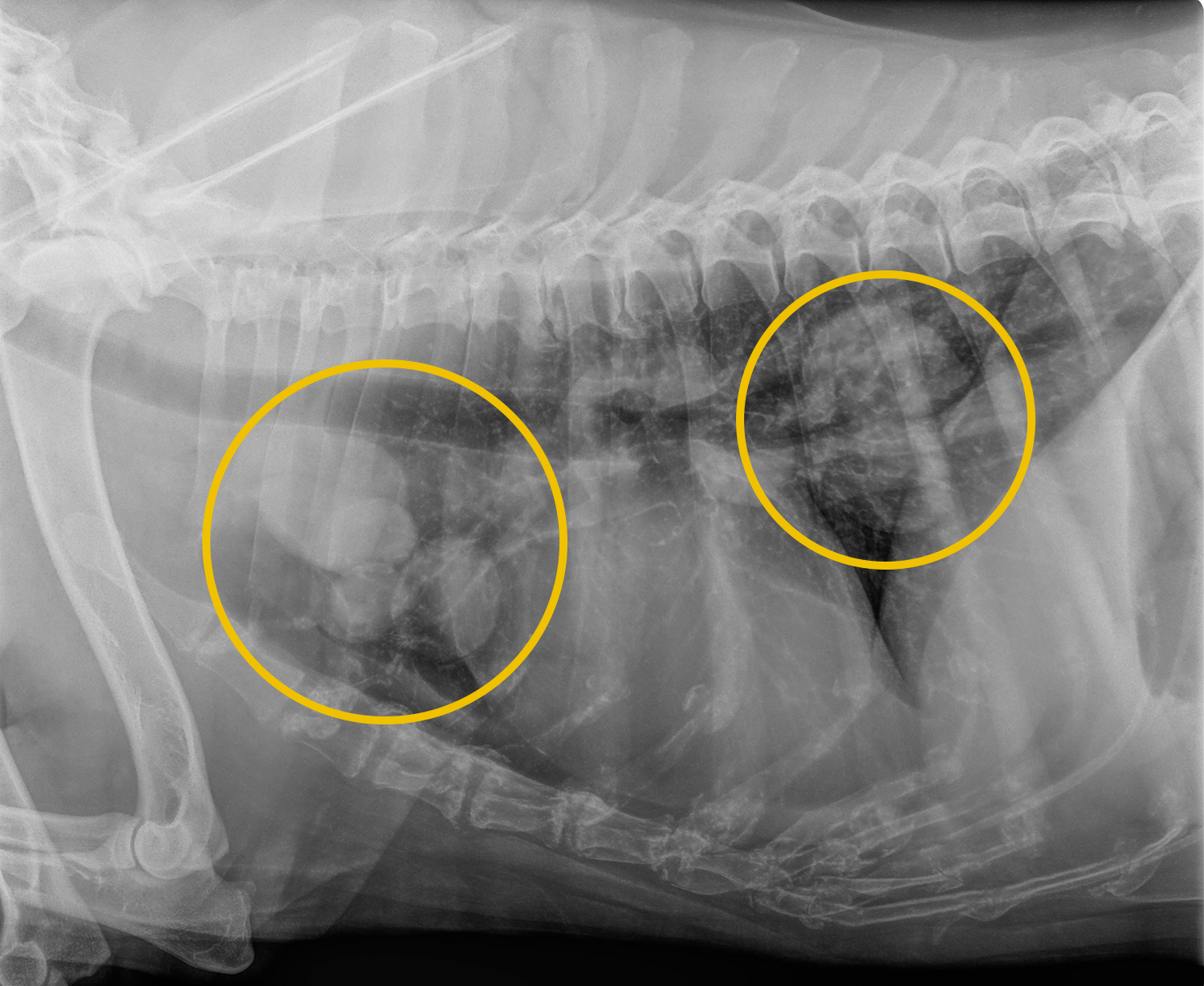 Chest ultrasound can be used in some cases to assess a lung tumour or to obtain a tissue sample or aspirate.

A CT scan is recommended prior to surgery to be able to draw up a precise treatment plan. After all, CT scans can detect lumps in the lungs with dimensions of about 1 mm, while with radiographs this can only be done starting from 7-9 mm. Furthermore, CT scans of the chest are more accurate than chest radiographs in detecting metastases to nearby lymph nodes.

If fluid accumulation in the lungs is present, a sample should be taken here.

Furthermore, broncho-alveolar lavages (the administration of fluid through a tube to the lungs, after which this fluid is withdrawn) could help to diagnose lung tumours. If a lung tumour is present, there is a good chance that the accumulated fluid contains cancer cells that can subsequently be recognized under a microscope. However, this approach is based on results obtained from a small group of dogs (14).

A fine needle aspirate of the lung mass provides a diagnosis in 38-90% of cases but is not possible in all cases due to the location of the presumed tumour.

A lung tissue sample prior to surgery can be done to find out if the nodule is a lung metastasis or a primary tumour. In the case of metastasis, surgery comprising of the removal of a part of the lungs is generally disregarded as an option.

The sampling itself can be done via a biopsy needle, an endoscope in the airways or an operation during which a part of the lung is removed. Tissue sampling of the lymph nodes at the branch between both lungs is recommended because spread to the lymph nodes significantly affects the prognosis and usually performed during surgery.

Surgery is recommended for primary lung tumours that only affect a single lung lobe and have not yet metastasized. Based on the location of the tumour, part of or the entire lung lobe is removed. Depending on the required field of vision and location of the tumour, this procedure can be performed through an incision on the side of the chest, through the sternum or through an endoscope.

Little is known about how chemotherapy works for primary lung tumours. The clinical studies that have been carried out so far with different chemotherapy drugs have shown that varying, but often disappointing results have been achieved. Vinorelbine and cisplatin are used in humans and these chemotherapeutics are also expected to have the best effect in dogs. Research into the administration of an aerosol with chemotherapy drugs or cytokines (immune stimulating substances) led to good results against metastases in the lungs, less against primary tumours.

Little is currently known about the effects of treatment with tyrosine kinase inhibitors against lung cancer cells. Toceranib (TKI inhibitor) has been used successfully in some dogs, both in primary lung carcinomas and metastatic carcinomas, but more research is warranted to determine the clinical efficacy of TKIs in the management of dogs with primary lung tumours.

Little is currently known about the effects of treatment with monoclonal antibodies against lung cancer cells.

In humans, radiation is most often reserved for tumours considered non-removable. Because the region to irradiate isn’t immobile (breathing lungs), special techniques are used to provide a more precise delivery of radiation and spare unaffected tissues. Use of such treatment options remains to be investigated in dogs and cats with lung tumours.

Radio frequency ablation is a technique in which an electrode is inserted into a tumour, which is then heated. The cancer cells die as a result of this heat. This technique can be performed through the skin through CT guidance. This technique has already been experimentally tested on 5 dogs with good results but needs to be further explored.

The prognosis gets worse as