Brain tumour
Back to overview
Summary

Tumours in the brain can also be metastases from tumours located elsewhere in the body. This can be the case for tumours of the mammary gland/lungs/prostate, hemangiosarcoma (tumour of the blood vessels), malignant melanoma (skin tumour), lymphosarcoma (tumour of the lymph nodes). The tumours can also originate from locations near the brain, such as the sinuses, the nasal cavity, nerves, the thyroid gland and bones. 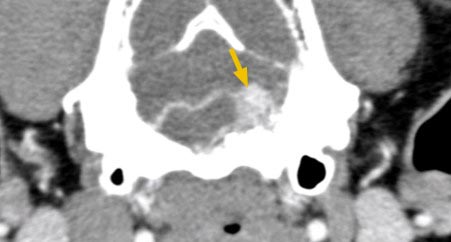 The clinical signs vary and can manifest themselves according the effect of the tumour in its environment or at a distance.

Since the brain tumour is situated in an important location even benign tumours there can lead to grave consequences. As the benign tumour grows, it will cause pressure on brain tissue which can lead to damage. In turn, this damage can lead to inflammation and bleedings.

The most common symptom of a neural malfunction in dogs with a brain tumour is the sudden appearance of epilepsy episodes in dogs older than 5 years of age (which is more than 50% of patients). Between these episodes the dog can be perfectly normal. Blindness is possible. Other symptoms are more vague, such as apathy and a lack of appetite. It is also possible that the dog demonstrates a change in behaviour, walks in circles, presses his head against something and ignores stimuli on one side of the head.

These symptoms evolve slowly, it is therefore possible that behavioural changes were already present for months or even a year before the diagnosis is made. These symptoms are often unjustly attributed to old age.

Brain tumours can appear at each age, in each sex and race. The median age of occurrence is 9 years of age (meningiomas occur more in dogs at an older age).

A higher risk for this type of tumour development has been reported for Boxers, Boston Terriers, French and English Bulldogs, Golden retrievers vs other dog breeds. In long-nosed dogs more meningiomas are observed, whereas in short-nosed dogs gliomas are more common.

One can suspect the presence of a brain tumour as cause for neurological abnormalities through the characteristics of the dog, his anamnesis and neurological signs. However, other causes can also lead to a similar presentation (inflammations, degenerative disease). To be sure of the cause, it is necessary to visualize it.

During the neurological examination the dog can be checked for neck pain and abnormalities in the way the paws are repositioned.

The analysis of blood and urine give information about (problems with) the general state of the dog.

In 23% of dogs with a brain tumour there are concomitant tumours that are not related to the brain tumour. To find these, it is advised to do an ultrasound of the abdomen.

One can visualize metastases (when the tumour is large enough) in the lungs or a second tumour when taking radiographs from different angles. It is rare that the tumour (meningioma) causes a local enlargement of the bone or even bone destruction.

Radiographs of the skull do not provide useful information in case of brain tumours.

MRI is the preferred visualization technique for brain tumours. On these images it is possible to make the distinction between a meningioma and a glioma (the meningioma will rather displace the brain tissue, absorbs contrast die in a uniform way, and has a clear delineation, whereas a glioma is more likely to penetrate the neighboring brain tissue, absorbs the contrast die in a non-uniform way, and often does not have a clear delineation). This being said, there are exceptions to the rule. In a study with MRI, in about 70% of cases the tumour type could be predicted via MRI. The definitive diagnosis is possible via a tissue sample (that can only be taken after the possible biopsy location has been carefully determined).

The ease with which a tumour can be removed depends on its location and the tumour type. With meningiomas the cortex and cerebellum are more easily reached than the brain stem. Gliomas are more difficult to remove than meningiomas, although this cannot always be predicted and depends on the degree of tissue penetration of the tumour in the surrounding tissues. After surgical excision of the tumour, it is advised to continue with a supplementary treatment such as radiotherapy.

(Supplementary) radiotherapy can lead to a longer survival compared to a treatment consisting of only surgery or medication. The smaller the tumour, the more efficacious the radiotherapy is. Stereotactic radiosurgery consists of a very precise release of a higher radiation dose in one session.

The information on other treatment types (heating up the entire body, gene therapy, brachytherapy) is limited.

The prognosis is poor without treatment or without supportive treatment. As biopsies are seldom taken from brain tumours, it is not well known what can be expected from which tumour type concerning survival. Survival times as wide as between 0 days and 3 years have been reported.

Factors that have a positive influence on the prognosis:

Half of the meningiomas have an aggressive behaviour and there is a high risk of relapse.